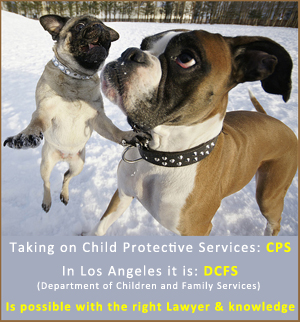 Most of the attorneys appearing in the Juvenile Dependency Court are appointed by the Court. Should you be worried about that? Yes. Besides the potential for being part of the CPS/DCFS “system” that investifgating you or have taken your kids (paid by same county employer, attend Christmas parties with the DCFS social workers, and DCFS investigators making a case against you), they are overworked. Appointed County-paid attorneys are in the same Courtroom day after day and have a heavy caseload. When you hire a private Juvenile Dependency attorney, he or she will be there only for your case and will have more time to spend learning about your case and interacting with you. The Dependency Court appointed attorney may only have a few minutes to speak to you (for the first time ever) minutes before your case is called. Does that comfort you?

Seeking out and hiring a private Juvenile Dependency attorney can be critical when your CPS/DCFS case is in the detention phase. Having a qualified Juvenile Dependency lawyer who is knowledgeable about YOUR case, may enable you to keep the children in your home or get them released relatively quickly.

2 – Inform CPS/DCFS Social Worker Your Attorney Must be Present!

Once you have located and retained your Juvenile Dependency attorney, tell the DCFS social worker that you would be more than happy to speak with him or her — BUT — your attorney has prohibited any meeting unless the attorney is present as well.

You might be shocked to learn that the DCFS social worker has ZERO evidence in your case. Frequently, a home visit or an office interview is part of their investifation of you. Thes CPS social workers, who have no evidence against you, will use the interview with you to collect damning information which can build the social worker’s case and be used against you.

3 – Call on Your Kid’s Relatives – It Takes a Village

Many DCFS social workers will, by default, want to place your child (kids) in someone else’s care. So get busy and be prepared! Make a list of names, addresses and phone numbers of as many of the child’s relatives (your relatives) who can take the your minor child(ren) into their home. It is very hard for DCFS to deny placement with a relative or even a non-related family member who has close ties to your kid(s). Consider the strentgh of your case if you have a list of 10+ names — each ready to take your child in for a while!

4 – Document You’re Working on Being a Better Parent

Many younger parents are still wrapped up in behaviors of drinking, partying, and, well you know. If DCFS social workers have you against the wall for behaviors not in-line with being a stellar parent, and you’ve been addressing that, bring proof! Bring copies of any certificates of completion from drug rehabilitation, anger management, parenting classes, AA meeting attendance, or documents proving counseling enrollment and attendance to the hearing with you.

Sometimes DCFS will brings up old allegations of an ancient drug history or long-ago domestic violence charges. Come prepared! They have access to government databases with your history. Don’t assume “no one will find out about my history.” Instead, be prepared. Then if they do get up in your face about ancient history, bring out your cocuments proving completion of rehab, counseling or classes which successfully dealt with those old issues. Being prepared; having all your evidence with you (when and if it comes up) demonstrated to the Judge at the detention hearing that there is no current risk of danger. Moreover, if you seem more calmly, and efficiently prepared that your accusers, most Judges will take serious notice.

5 – Was Your Child Injured – Who was Present?

If the CPS DCFS case involves an unexplained injury of your child, figure out which persons had the minor in their custody , in your absence at the time.

Try to remember who was with the child during the time frame the injury was alleged to occur. Try to remember all persons who were with the minor that day. By going back in time you might remember another person or witness who could shed light on who might have injured the child. Sometimes it might be a babysitter.

6 – Are You any Percentage of American Indian?

If you have American Indian heritage it is very important to get that information on record. Get information about tribal enrollment of your parents, grandparents, and great-grandparents. Find out the date of tribal enrollment, if any, name of the tribe, date of birth of the relative. There is a form to fill out in court concerning Native American heritage. A trained Juvenile Dependency Attorney will help you with this process.

There is a form to fill out in court concerning Native American heritage.

If you are the father, the Court will want to know if you assisted the mother while pregnant, were present at the birth, was named on the birth certificate, supported the minor after the birth, if you were married to mother, or if you affirmatively asserted that the child was yours. The Court will make a determination of paternity at the detention hearing.

If you are the mother, the Court will inquire as to the father of each minor as to whether the father assisted financially during the pregnancy, was present at birth, was named on the birth certificate, was married to the mother at birth, acted as the father after birth by visiting the minor, providing support, etc. Your Juvenile Dependency Lawyer can assist you with this.

8 – Be Courteous and Polite

Be courteous and polite to the investigating CPS/DCFS social worker on the case. It does not help to be rude to the social worker. Anything you say negatively will be used against you.

9 – Provide Photographs of Your Home

Provide photographs of your home if the home is alleged to be in a filthy condition. This will be physical, concrete evidence that (1) the home was never messy as claimed, or (2) the home has been cleaned up. This will show DCFS investigators that the situation was misreported, or prior, messy or unsanitary living conditions have been resolved.

Figure out a safety plan so that the minor(s) can be safely left in the home. Find out if a relative, like the grandmother, can move into the family home to have additional safety. If one parent is alleged to have injured the child(ren) and the other party is not named, see if one parent can move temporarily out of the home so that the minor(s) can stay with the “non-offending” parent. The Juvenile Dependency Attorney can request for family preservation so someone will be coming by on an unannounced frequent basis.

Find out if a relative, like the grandmother, can move into the family home to have additional safety. If one parent is alleged to have injured  the child(ren) and the other party is not named, see if one parent can move temporarily out of the home so that the minor(s) can stay with the “non-offending” parent. Ask for family preservation so someone will be coming by on an unannounced frequent basis.