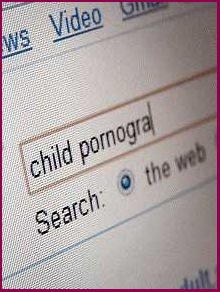 Moreover, if you are accused of using the Internet to download or distribute child pornography, you could be charged and tried in federal court, where the penalties are significantly more harsh and the criminal procedures far less flexible than they are in state court.

What is Child Pornography?

Under federal law (18 U.S.C. §2256), child pornography is defined as any visual depiction, including any photograph, film, video, picture, or computer-generated image or picture, whether made or produced by electronic, mechanical, or other means, of sexually explicit conduct, where:

Punishment and Penalties for a Child Pornography Conviction

Child Pornography Prosecutions on the Rise

In America, the fastest growing criminal prosecution of all time involves Internet sex crimes including the downloading, possession, and distribution of child pornography. Virtually every day local, state and federal law enforcement agencies are searching the Internet seeking to find people to arrest. Does that seems harsh? Does that seem like “Big Brother” government? Many say that it is.

Why the recent rise in persecutions? Well the Internet has made illegal images available to virtually any person on the planet with a smart phone, a tablet, laptop or desktop computer. Society reacts and pressures lawmakers to make aggressive laws. Congress and many State legislatures wanting to be seen as addressing the culture’s concerns, have made government funding available to any law enforcement agencies that want to search for anyone downloading any child pornography anywhere. The funds are there for the taking if the agencies want them. City, County, State and Federal employees are just like anyone else. If there is money to be had, people will step up. Upshot of all this investigative activity? Accusations and charges are filed all over the country every day.

If you get caught with child pornography on your computer –even if by a detective 2 miles from your computer– there is a significant chance that federal charges will be filed against you. Again, it won’t matter if it was a local detective at the city or county level who first identified you. The investigator that identifies you can claim the credit and their agency will continue to be funded for the “find” and then pass the case up to a federal agency which has the pocketbook and resources to bring charges against you and then prosecute you.

You are Innocent of False Allegations of Child Pornography

Let’s face it, sometimes people make mistakes and the government uncovers those mistakes. The consequences of this particular mistake can be harsh, but there are ways to lessen and negotiate with the prosecutors and the courts so that you do not spend a long time in state or federal prison. An experienced criminal defense attorney can sometimes help you find a treatment program that might even help you stay out of prison. You need an attorney who can understand your situation and communicate and negotiate with the Prosecutor. If you try to go it alone, the chances for a good outcome are slim. You need experienced and aggressive legal help just as much –or more– when you are guilty as if you were falsely accused.

Criminal Defense Attorney Vincent W. Davis is dedicated to zealously defending his clients. When a person is charged with one or more child pornography charges, they are facing the overwhelming might of law enforcement, prosecutors and judges. If that is your situation or that of a loved-one, you will require a highly trained, dedicated and skillful lawyer to protect the accused person’s constitutional rights and interests.