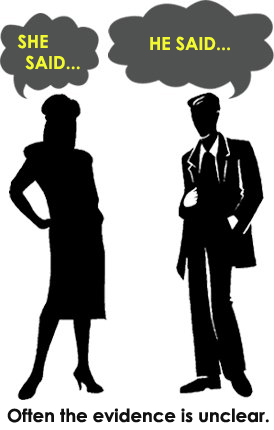 There are few life experiences more frightening then being accused of a “sex” crime. Sexual Battery / Sexual Assault cases, in particular, must be defended aggressively or else the system will eat you up and spit you out. There is nothing “fair” about the justice system when charges are both politically & culturally-charged and police and prosecutors’ name-recognition, professional evaluation, advancement and pay levels are tied to the successes of their prosecution record.

Sexual Battery is sometimes interchangeable with Sexual Assault. According to Penal Code Section 243.4, “sexual battery” is defined as:

What Must a Prosecutor Prove for Conviction?

In order to prove the charges of Sexual Battery a prosecutor must prove ALL of the following:

Sexual Battery, section 243.4 of the California Penal Code, is a “wobbler”. A “wobbler” can be filed as either a misdemeanor or a felony depending on the circumstances of the case.

What You SHOULD NEVER DO if Accused of a Sex Crime

NEVER DISCUSS AN INCIDENT with your accuser, relative or caretaker of accuser on the phone.
> Your conversation is also likely to be recorded.
> iPhone App recorders can be downloaded in minutes and cost $5.00.

NEVER DISCUSS AN INCIDENT with ANYONE but your lawyer. Not family. Not friends.
> Your family members & friends can be forced to testify against you!.
> Keep your mouth shut. Keep your thoughts to yourself. Call a Lawyer!

But… I am Innocent!

Do not for one minute believe that you have nothing to fear if you are innocent. In reality, you probably have more to fear. If someone has it in for you, they may go to any length to incriminate you. Remember too, a successful defense is dependent upon early and thorough investigation. Sexual Battery cases require some investigation which requires some time investment and the earlier the better to get all the facts to mount a credible defense.

Take Action Quickly When Investigated or Charged with Sexual Battery

An experienced criminal defense attorney will advise you that the best sexual battery / sexual assault defense depends upon how early an attorney becomes involved — even better if you get legal representation BEFORE charges are filed. Really?

Yes – Really! If you think that you might be charged, your attorney can make a personal call or an in-person-appearance to the detective assigned to investigate you. Remember this detective is in the process of building a case against you. His ultimate goal, if s/he feels there is sufficient evidence is to recommend that charges are filed against you. You have virtually no chance at convincing the police to “see your side of the story,” and frankly making the attempt is the worse possible move you could make. You’ve heard the line a 1,000 times on TV: “anything you say CAN AND WILL be used against you…”

The police recite THOSE exact words because that is exactly what they do! Your words –no matter how honest and true– will be turned against you! The “victim” is essentially the detective’s client. You are the detective’s target.

However, when your lawyer approaches a law enforcement agency on a client’s behalf before charges are actually filed we can and often do make a real difference. We know many of these detectives from daily interaction within the judicial system and already have common ground to sit down over coffee and talk one-on-one. Since we are not “their target,” we have a congenial setting where we can share “your side of the incident” as an “equal” – as a 3rd party where we can reason with the investigators on your behalf. Moreover, our conversation is essentially “off the record” and cannot be used against you. Finally, such preemptive actions can be very effective and sometimes result in the case being dropped whereby you would avoid criminal charges altogether. It’s like persuading a motor officer to not write you a ticket – but should the officer have already started to fill it out – then it is more of a challenge as they would have to explain a started-citation to the boss back at the police station. Same goes for criminal charges. Always a window of opportunity to explore before charges are filed.

That said, even if charges are filed, we can investigate the facts thoroughly and build a stronger case if we are involved from the beginning. Our goal is to keep clients out of jail and off the sex offender registry: which is a lifelong ball and chain around your neck.